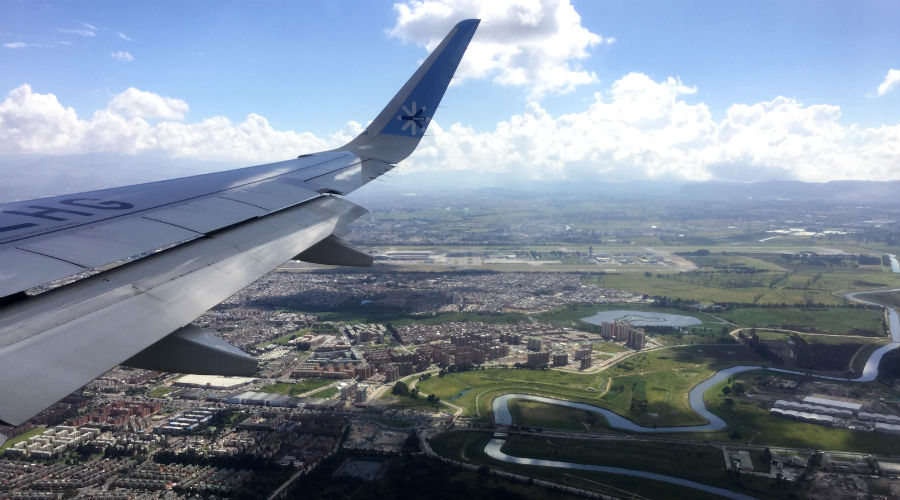 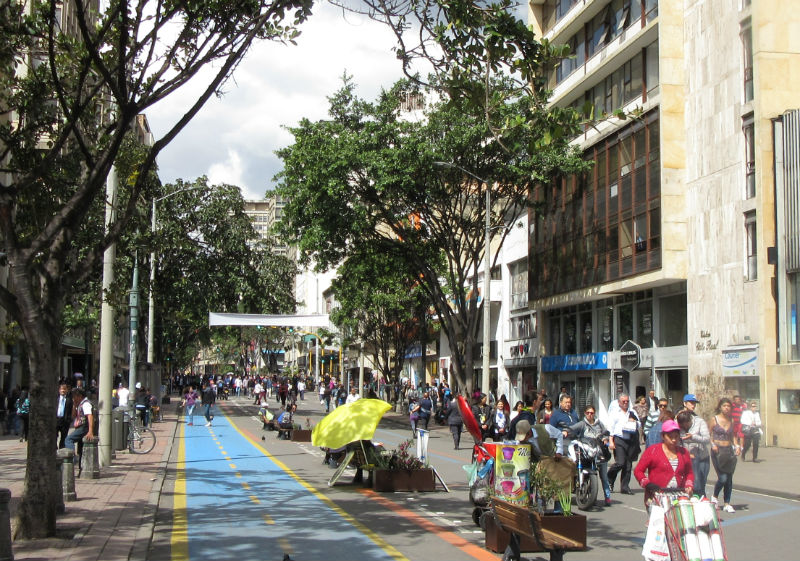 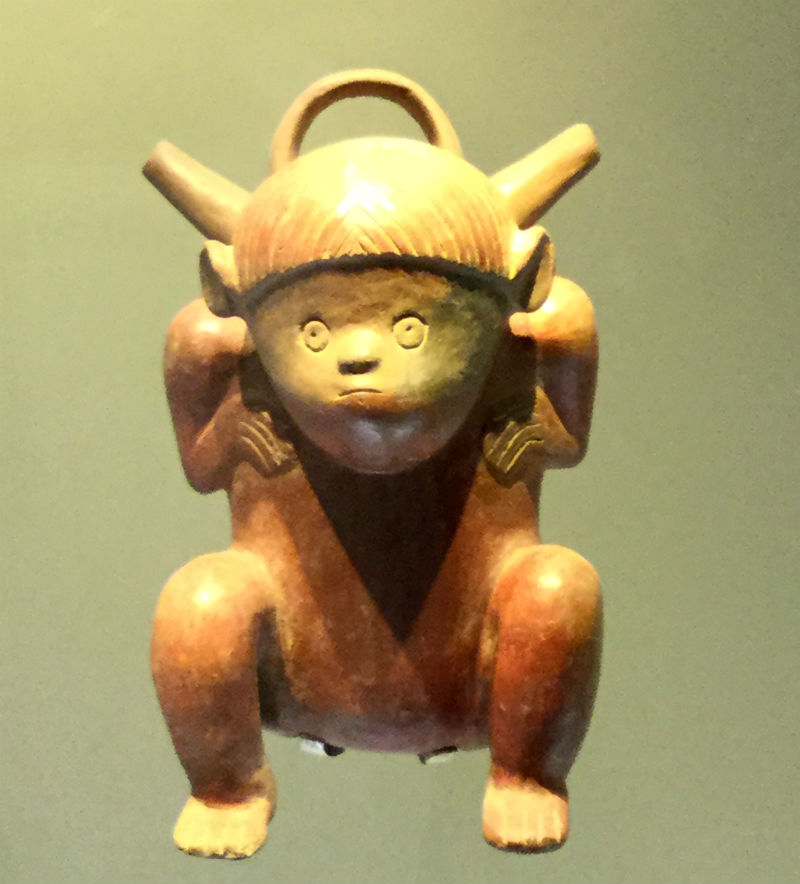 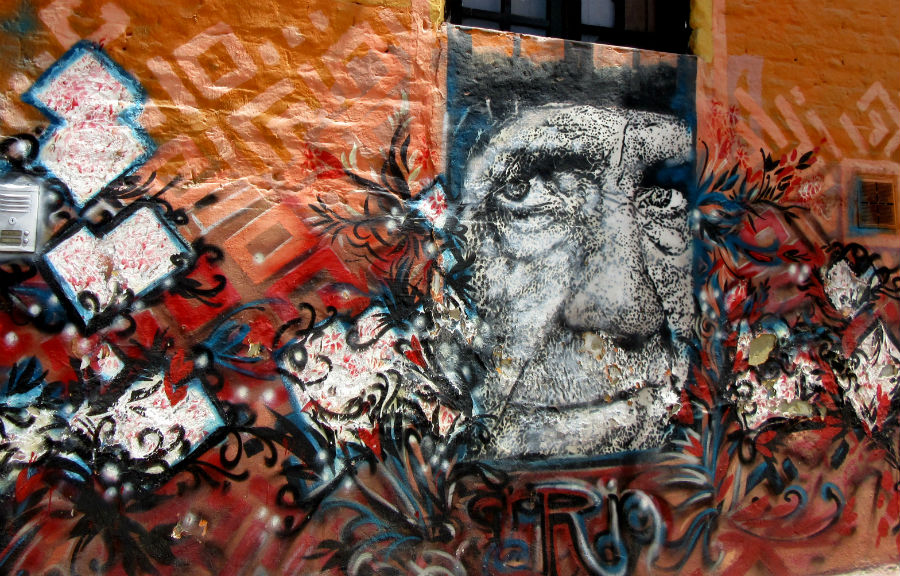 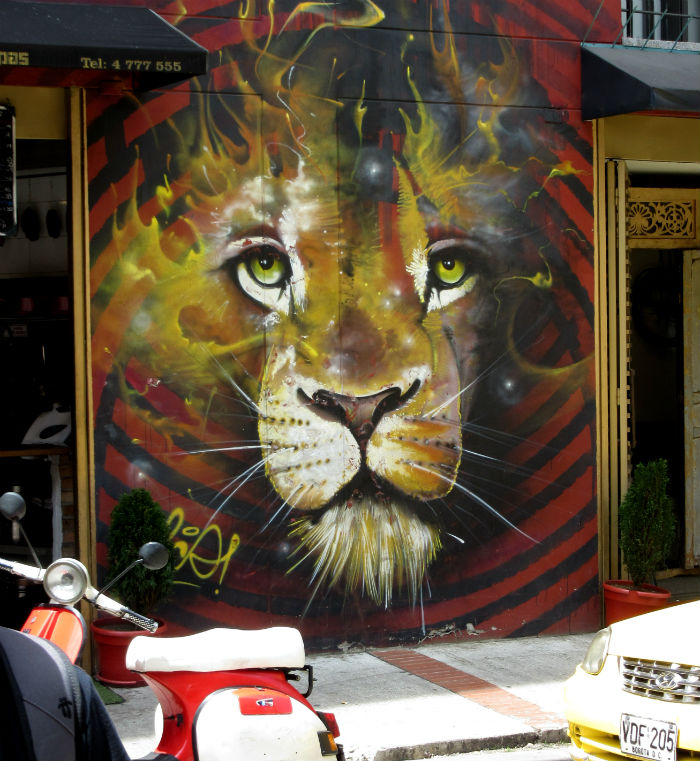 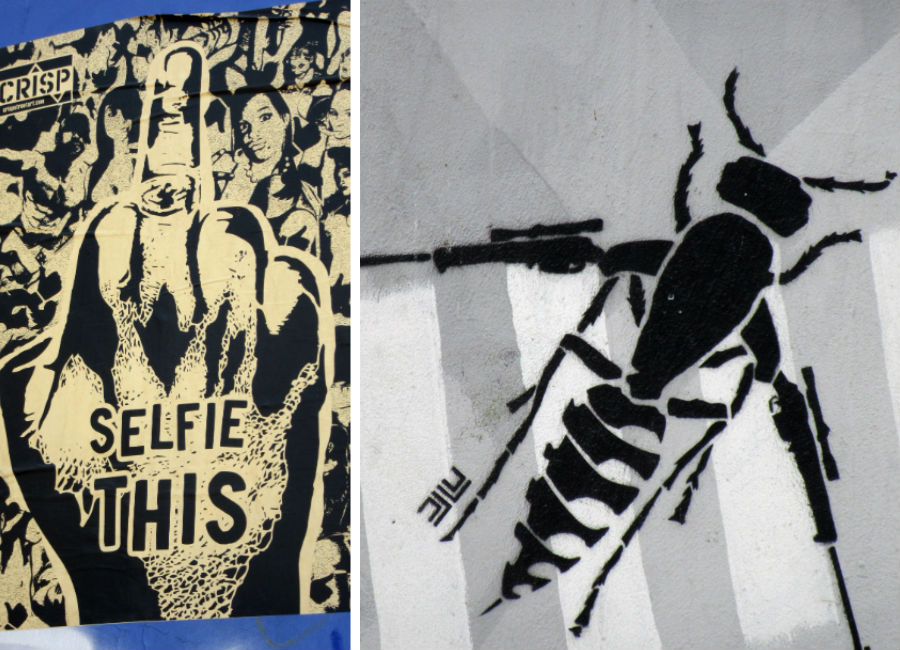 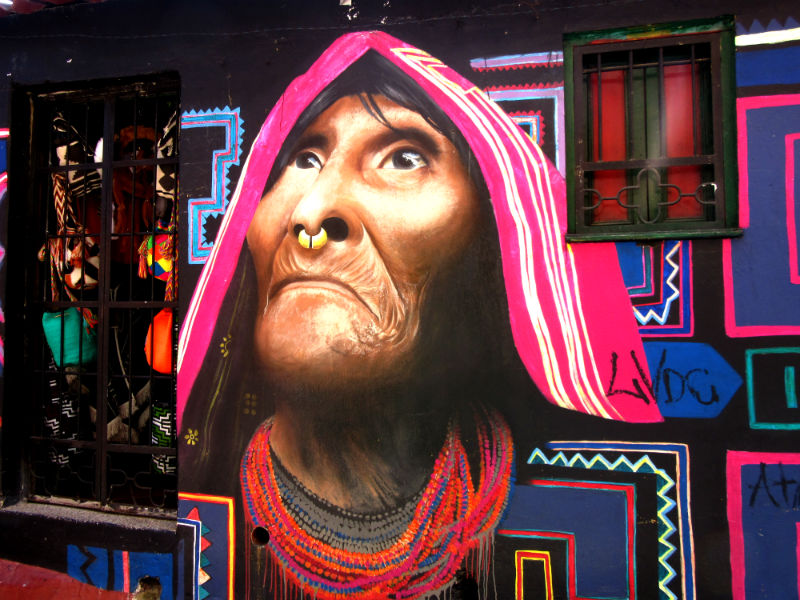 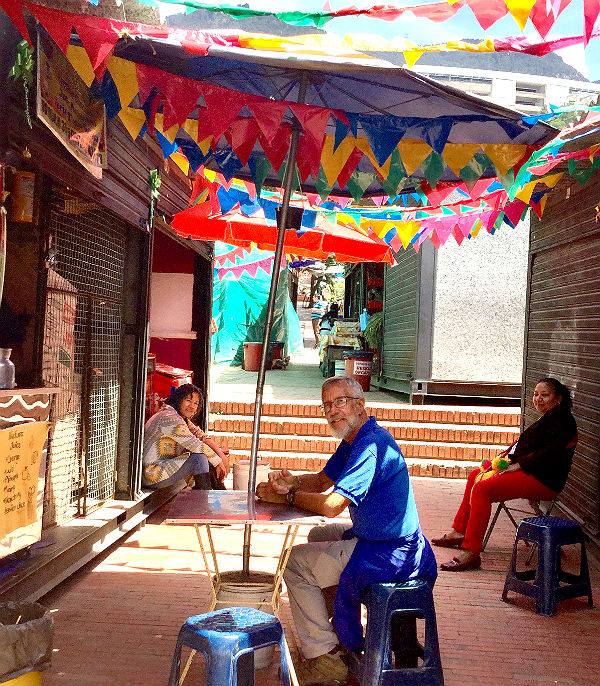 On Wednesday night before leaving for Socorro, neither of us slept very well, or very long, but we had no trouble getting ready and walking to the bus terminal on Thursday morning. For a change, everything was smooth. The Berlinas bus to Socorro was easy to find, on time, and quite wonderful. Immaculate, bright, and with super roomy and comfortable seats.

The only problem was that we chose our seats badly when making our reservations. Though the bus windows were huge and the views marvelous, our seats were in the very front and our window was not like all the rest. Still, Barbara, who sat by the window, got a few wonderful photos.

The bus stopped for lunch at a restaurant that clearly served the bus traffic, and it was a surprisingly complete and fairly good meal -- grilled beef, fried yucca, sweet potato, something like cooked platano, and a side salad with bits of chicken. The bill was so low that when I went to pay, I doubled the price, thinking the check we had was for one person only, but I was wrong. The meal was about $2.50 per person, with club soda another $0.75 each! The cashier obviously could have ripped me off, but didn’t.

It was late Thursday afternoon when we arrived in Socorro, and we found our little hotel, La Clementina, with no difficulty. I was a little depressed by the place at first. The town was bigger and busier than I’d hoped. Our room was bare and huge, with four beds, and not much light. It was hot, and with no hot water. It was clean and cheap, and that seemed about all. (The next day, we learned to appreciate both Socorro and the hotel far more.)

We wandered into town at dusk, and there is a lively park in front of the cathedral. I found a good pair of sandals for a reasonable price at a shoe store. There were many vendors in the park, and a few good places for coffee and light meals.

In the park after dark, we tried something called a “pincho.” It was a kind of shish-kabob, pieces of beef, chicken, and sausage grilled over open coals, plus a potato. We shared one, liked it, and will surely get one apiece soon.

About new foods: so far we’ve tried a few kinds of arepa, the best of which were arepas filled with sweet cheese, sold in the street right outside our apartment in Bogota. Also, of course, empanadas. We’ve tried a juice from a fruit called Lulo, which can be really good if sweet enough. We also enjoyed several servings of salpicon, a mix of fruits and juices which you both drink and eat with a spoon.

This morning, Friday, put a new light on things, literally. With the shutters open, our room was brighter and cheerier. We saw the owner again, Norberto, and met his wife Patricia. They were so kind and friendly! They gave us coffee, tea, crackers and mandarin oranges in a little garden area. Somehow Patricia found time to go into our room, make beds and organize our things beautifully. She did our laundry, and while we were out in the afternoon, she hung clean things in the closet and folded others in the drawer. She's being a mom!

When we went into the living-garden area for a few minutes after breakfast -- me to write on the computer -- we were quickly brought little plates of a fruit called breva, a kind of young fig marinated, we think, with clove and cinnamon. Wow, it was sweet and good. The folks here seemed so nice that if we remained sitting around outside our room, we might end up snacking all day. So we went out for a walk.

Around 1:30 in the afternoon we were back in our room for a siesta. We had walked through the town a little, and then started up a street that went up and UP. Eventually we found ourselves on the extension of Calle 14 that goes for miles into the hills, all the way to Paramo. We’d thought about going there by bus, and still may tomorrow, but for this morning, the long walk was enough.

When we returned to downtown, we had lunch at a restaurant, Restaurante Volver. It was the full-bore mid-day meal, salad and arroz con pollo and a fruit drink for Barbara; for me, salad, grilled pork, with rice, yucca, platano, and a drink. The food was very good and the restaurant pleasant and popular, but Barbara couldn’t quite finish hers. Colombian restaurants, it seems, pride themselves on generous portions. Anyway, it all cost $8 for both of us. Now we’re resting for the afternoon and heading back out in late afternoon. By the way, the walk proved that my cheap sandals are a great success.


All the pictures below are from the same late-afternoon walk in Socorro, as we head downhill, back into the center of town. 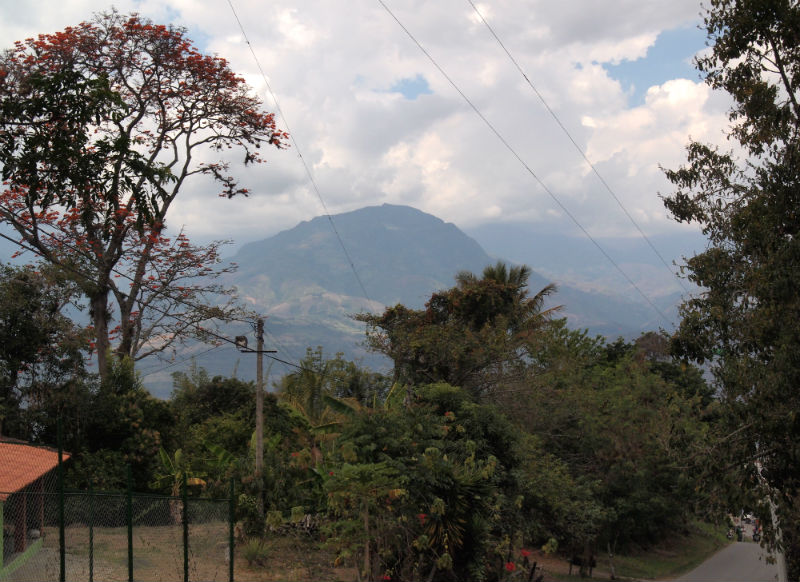 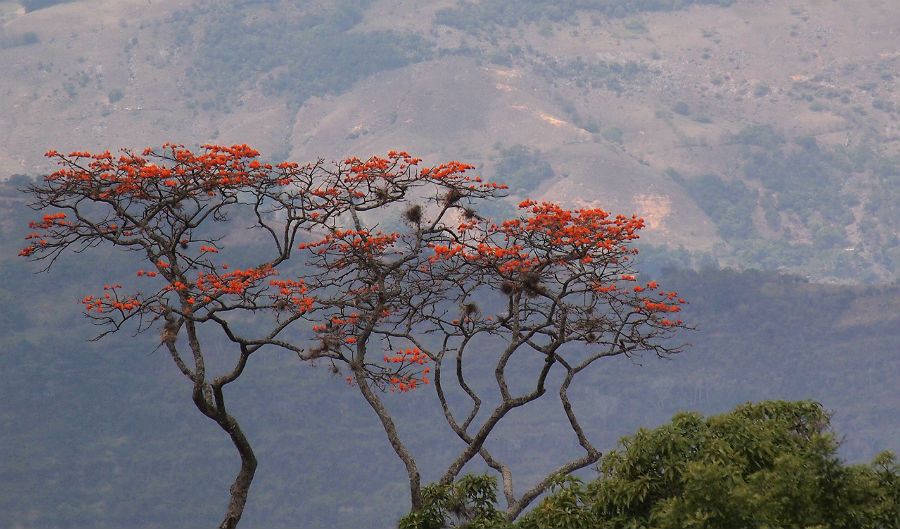 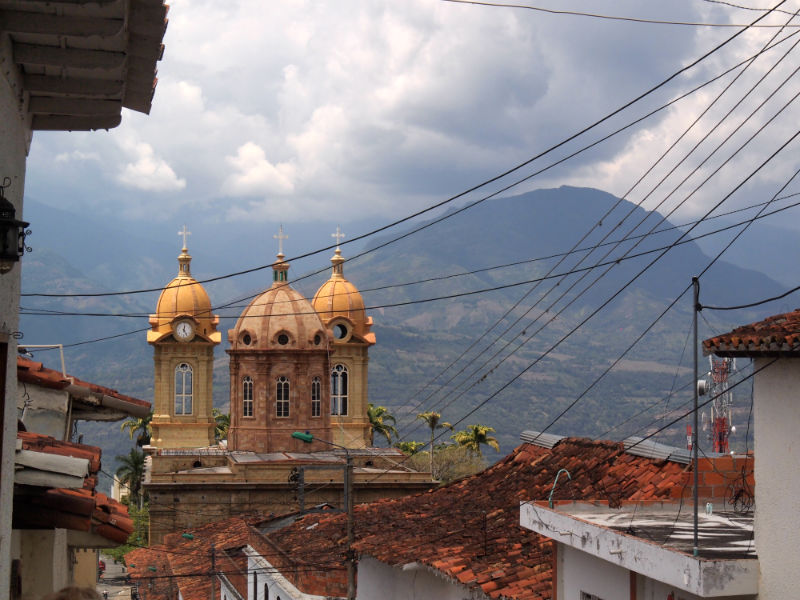 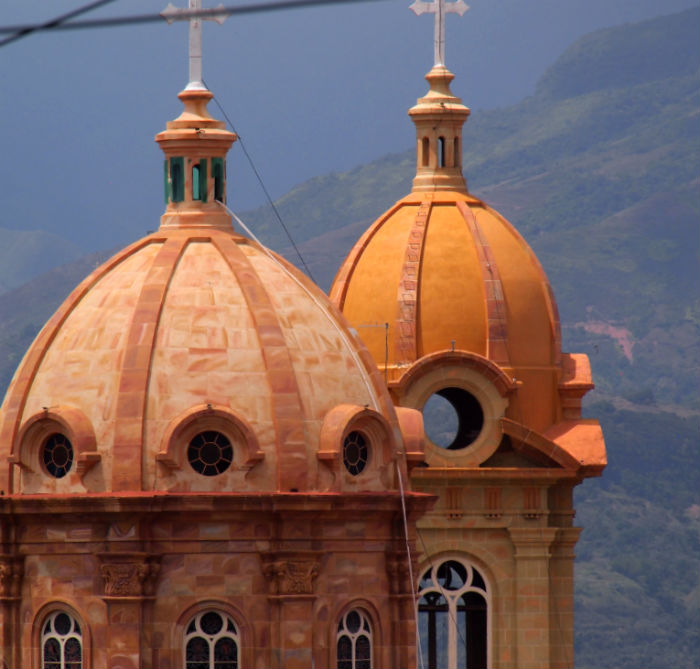 Saturday morning (Feb. 18) for breakfast we had hot chocolate, fruit, crackers and excellent cheese served by Patricia and Norberto. When we asked about taking a bus to Paramo (just for an expedition and a walk) they offered to take us there by car -- and then somewhere else, and somewhere else again. They said they wanted to go for a drive, but we think they were doing it for us. It was awfully kind of them. Norberto’s friend (employee?) Edgard drove. We had coffee in a park in Pinochete, then a full-bore meal in San Gil, on towards Cucuri to see the park, and then a stop for more coffee on the way back to San Gil. There we saw the river where they do whitewater rafting, but the water was low. Then we returned to Socorro. It was a full afternoon. Barbara didn’t like spending that much time in a car and we didn't take as many photos as usual, but it was nice to see so much, and our hosts were certainly kind to do all that for us.


The next couple of photos are also in Curiti. We also stopped for lunch in San Gil, a bigger, busier tourist town where I did not take any photos. 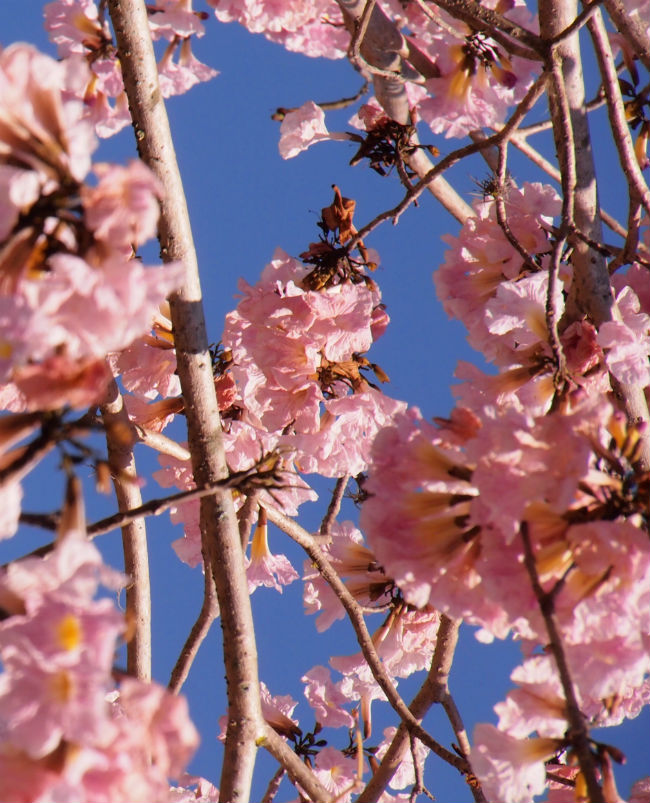 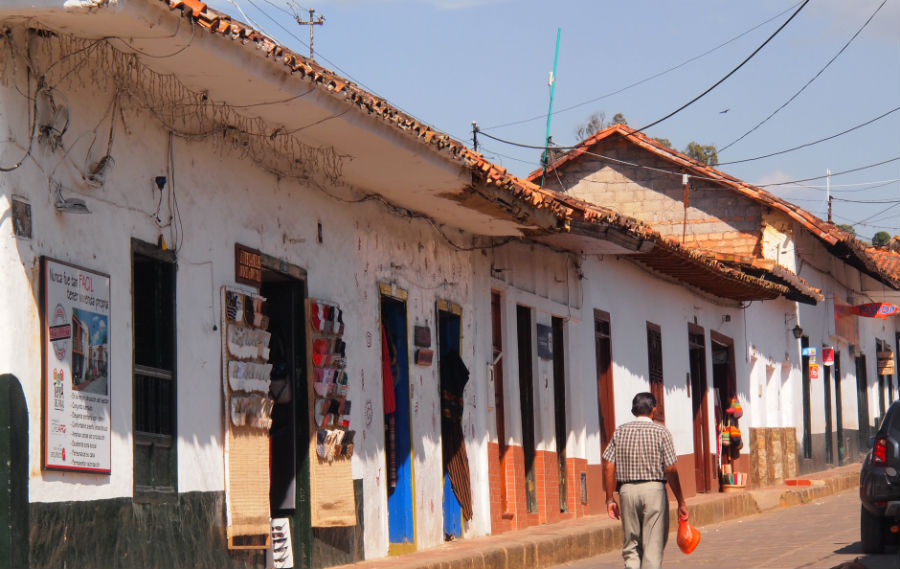 It’s almost dusk back in Socorro as I write this, and a band is setting up on the plaza, just a block or two away. There is a coffee festival this weekend. No doubt when we walk to the plaza later this evening, it will be jammed with people, noise, and food stalls. Tomorrow we leave for Barichara. 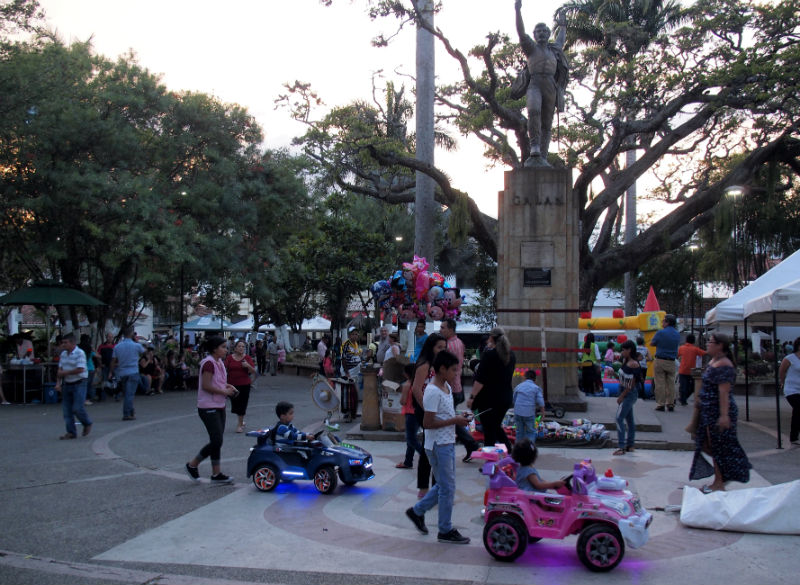 This final photo from Socorro is in the main plaza at dusk, when families often come for the evening. Various treats are sold by vendors. We often saw toddlers riding in these little cars. The children may pretend to steer them, but the cars are remotely controlled by the adults or older kids walking behind them. Parents love to take photos of all this. We do too.