On Wednesday, Feb. 22, we left Barichara by bus to San Gil and then took another bus north, heading for Cabañas Campestres, near an area called Chiflas.


Leaving San Gil, our bus driver had told us that he would be passing by the cabañas and would let us off there. But when we reached Aratoca, he told us to get off the bus and get into a cab, together with a Colombian couple. The bus driver had paid for the cab! Apparently he was not continuing on the route, at least not right away. Then arose the first real hitch in the trip. In the confusion getting off the bus (we weren't quite sure what was going on) Barbara left behind a leather bag with many things in it.

She didn't realize this until we were on our way in the cab. Luckily the Colombian woman in the cab with us spoke good English. Barbara told her what had happened, she told the driver, he pulled off the road and called the bus company, they checked the bus and found the bag, called the cab driver back, and he arranged for the company to hold the bag at the ticket office in San Gil. When we returned to San Gil a couple of days later, the bag was there with a note saying it was for "the gringos." Everything in the bag -- including a camera -- was safe and sound. The kindness of strangers.


One of the first things we did when we arrived at Cabañas Campestre was take a walk, accompanied by two of the owner's dogs. They were sweet, but whenever we passed through the small cluster of houses nearby, a dog riot ensued.

From the cabañas we could see the site from which paragliders launch, so the first thing we did was walk over there. By the time we arrived, nearly everyone had left. I looked at the launch site (where the wind sock is) and thought, "We're supposed to run off this?!"

But of course the next morning we did. Barbara was "flying with Bernie." As the take-off approached, it took several men to hold the chute in position. 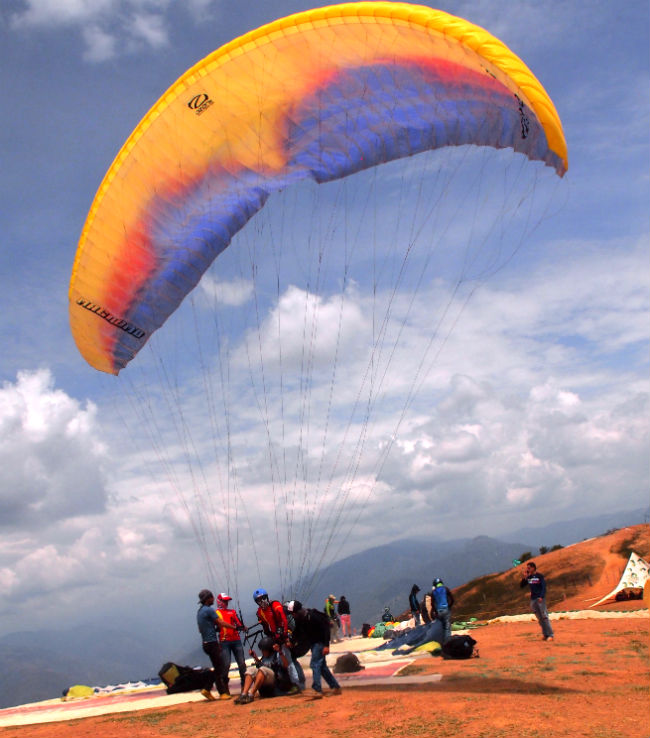 Landing on your ass seems to be the way it's done with novice passengers. There's a huge pillow-like bag under your seat to cushion the impact, which is considerable. Note that Barbara, about to be helped to her feet, above, is in the correct landing position!

On our last evening, we went for another walk in the area. Some photos below.


I haven't mentioned, as I should have done, that the owner of Cabañas Campestres, Marc Antonio, who lived in the U.S. for years, was wonderfully kind, helping us out in more ways than we can detail here. His brother-in-law Sergio, who retired from the Colombian army, runs the place when Marc Antonio is not there, and he was also terrific. Among other things, he served us breakfasts and suppers on the porch of our cabaña!

On our second (and sadly last) morning, Barbara got up early enough to take a photo of the canyon near sunrise, below.