We took a small bus from Villa de Leyva to Bogota and got off at the main Terminal de Transportes. From there it was an easy walk to Kylie's apartment.

On Tuesday, Feb. 28, we flew to Medellin, arriving in early afternoon. We understood that the place where we were to stay can be difficult for cab drivers to find, so we reluctantly opted for an airport pickup, using a driver known by our AirBnB hosts. At the arrival gate, there he was, and we reached Casa Museo Salsipuedes without a hitch. 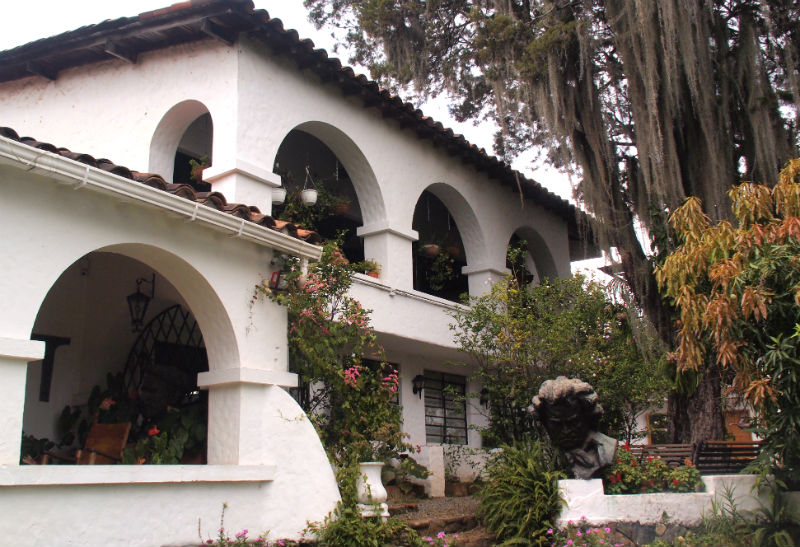 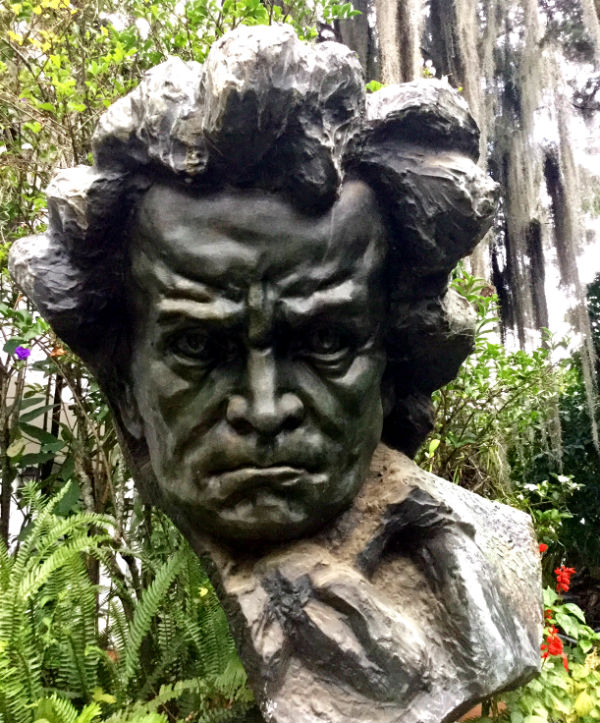 Casa Museo Salsipuedes is as interesting a place to stay as we could possibly have found -- not luxurious in any way, but perfectly comfortable for us, and with an extraordinary history. Our host Jenine grew up all over Latin America, it seems, as the daughter of Seventh Day Adventist missionaries. She married the son of Jorge Marin Vieco, one of Colombia's most important sculptors. They met in a music conservatory, and both are musicians. Jenine's husband Jorge is a sculptor as well, like his father.

The name of the house has a story. In 1948 a number of artists and musicians, including the owner, Jorge Marin Vieco, Jenine's father-in-law, were at the mansion when a storm broke out. Some guests tried to leave but returned bedraggled because of the rain and mud. A famous Colombian musician and conductor, Lucho Bermudez, was also present, with members of his orchestra. That night, inspired by the soggy guests who couldn't get away, he composed "Salsipuedes," which means "leave if you can." The song became well known all over Latin America, and "Salsipuedes" became the name of the house. 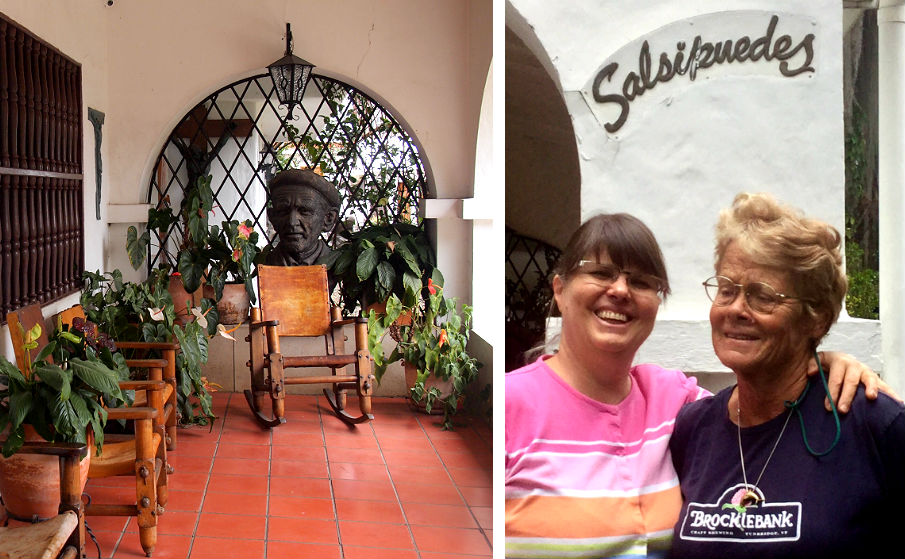 Casa Museo Salsipuedes is in a barrio that is very hilly, and for newcomers like us it was a challenge to get in and out of downtown Medellin. Nevertheless, with lots of advice from Jenine, we made it twice.

On our first visit we enjoyed a walking tour. Among other things, we visited Botero Square, named for Fernando Botero, Colombia's most famous contemporary sculptor. (His style is unique, based on exaggeration of and distortion of shapes and sizes, very different from the more realistic work of Jorge Vieco.) Many of his large sculptures are displayed in the square. 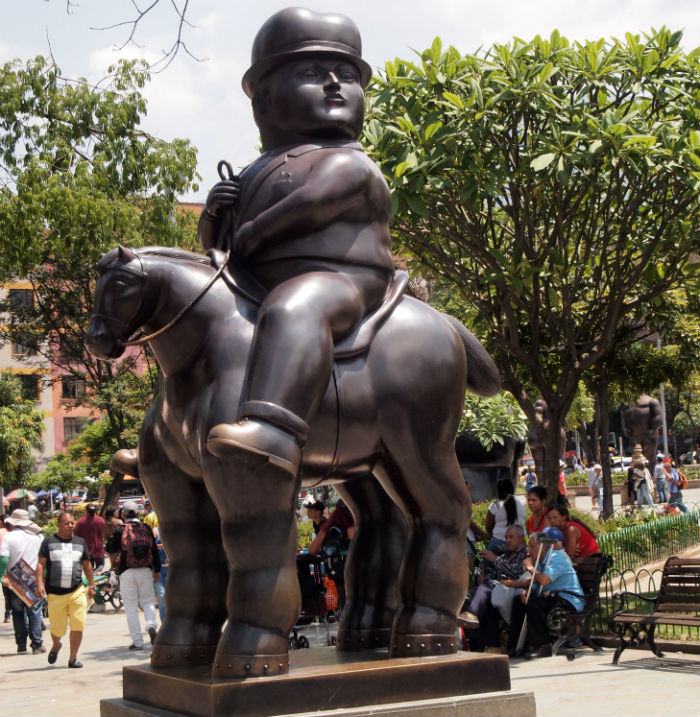 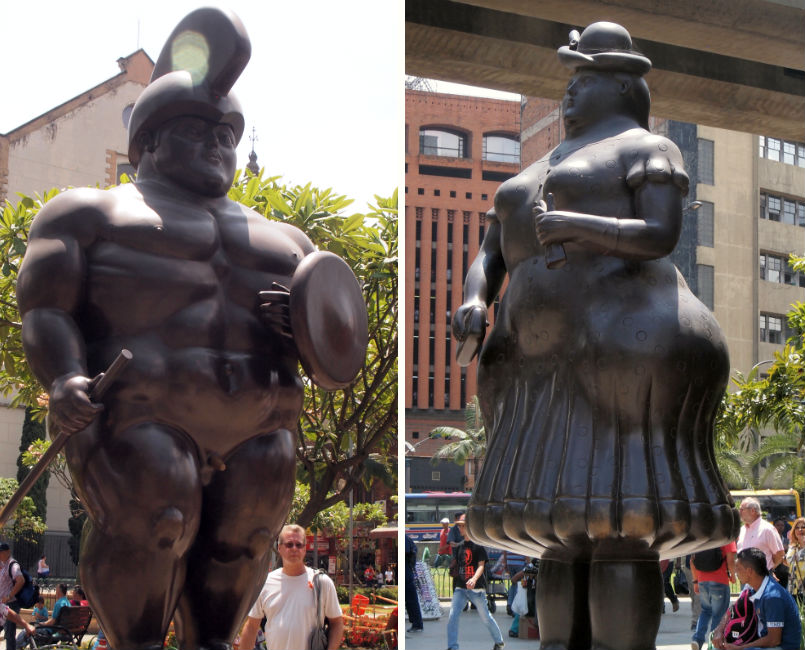 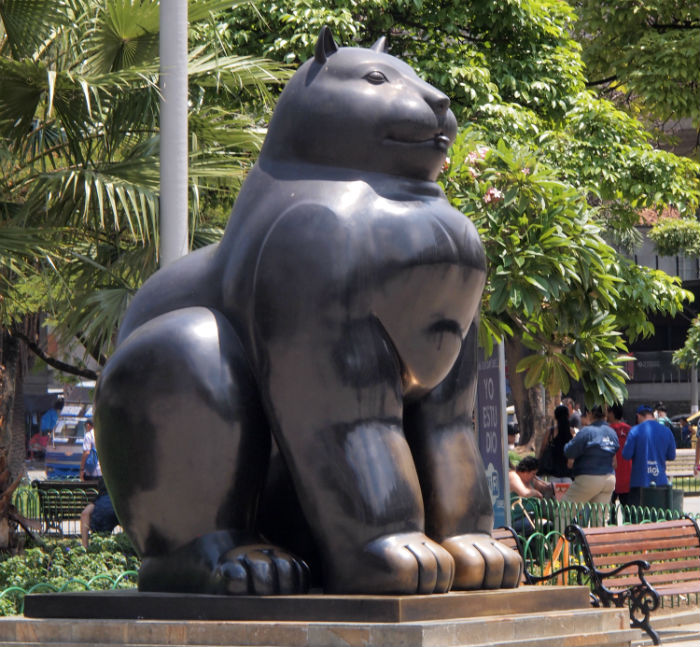 In the photo below, one of Botero's scultpures was blown up by a bomb in 1995 that killed 28 people (including a young child) who were in the square for a music festival. 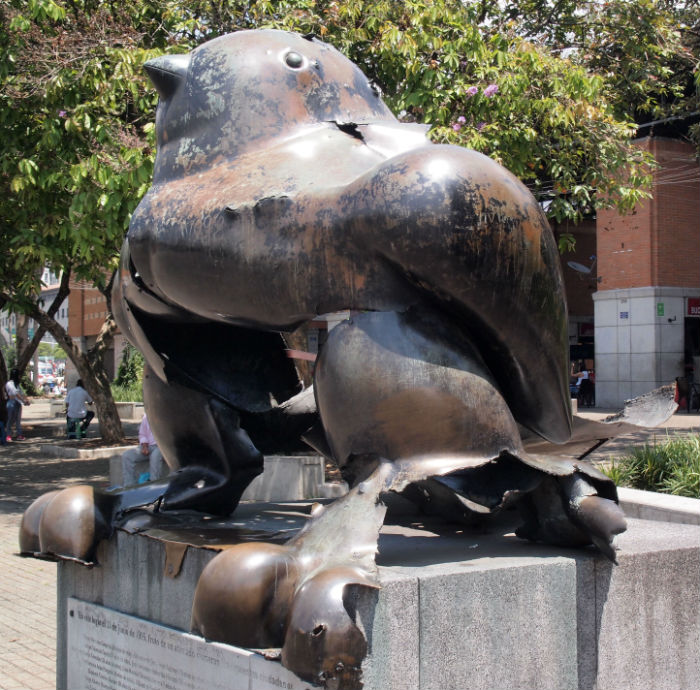 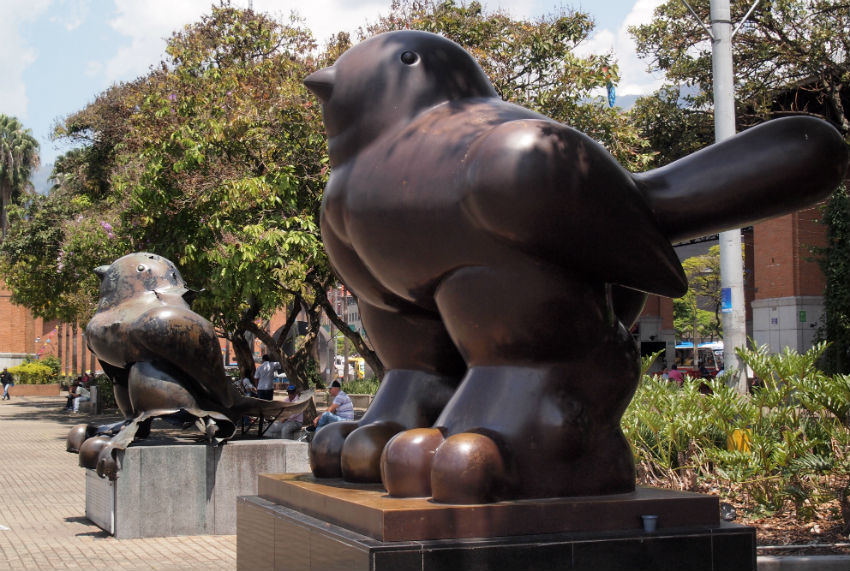 On the walking tour, our guide Juan talked about the history of Antioquia and the special place in Colombia of its people, who are called Paisas. He also talked about the resilience of the Paisa people, and about Medellin's dramatic recovery -- from the murder capital of the world to one of Latin America's most progressive cities. 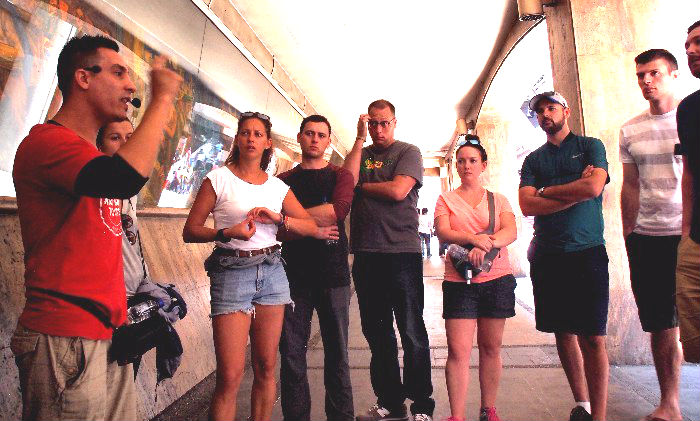 We visited the government plaza in downtown Medellin, where city and departmental offices are clustered. There is a soaring monument by the Colombian sculptor Rodrigo Betancourt, depicting the history of the Paisa people.

There were also displays of public art -- photographs and posters -- in the government plaza. It was called "El museo en la calle," the museum in the street.

We continued walking to the Plaza of Lights, part of a downtown urban renewal program that did not simply displace the poor; it was preceded by educational and social service programs that helped them find work and new homes.


Perhaps surprisingly, our guide Juan explained that Medellin's modern Metro system had a big part in restoration of the city's pride, and in its economic development.

Comuna 13 was once one of Medellin's worst slums, riddled with crime and drugs. An amazing public works project turned things around.

One of Comuna 13's problems was its location; on the flanks of a hill so steep that buses and cars could not reach it. Residents could only trudge down to the city and then climb back up the equivalent of 28 stories to get home. They were cut off from the economic development taking place down below in Medellin.

But that was before the construction of the giant outdoor escalator, the escaleras electricas. A series of 10 escalators carries thousands of people up and down the hill for free. 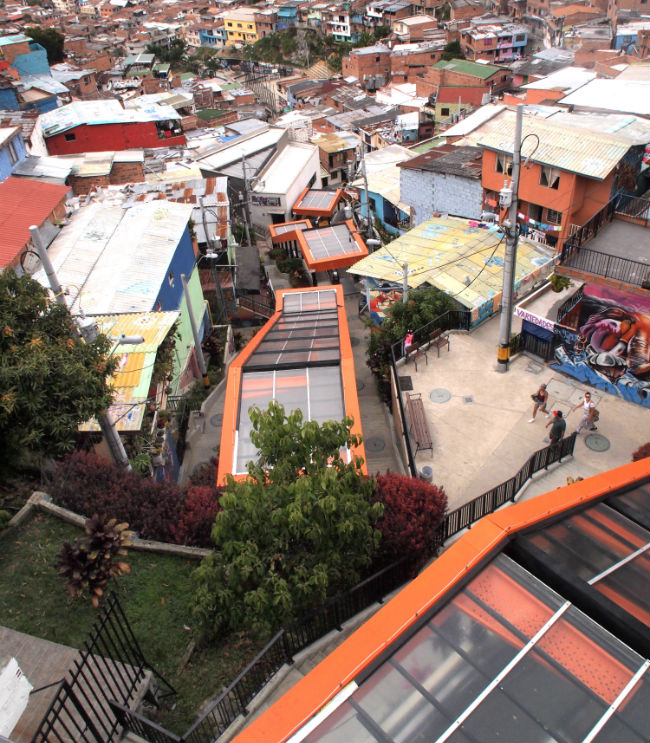 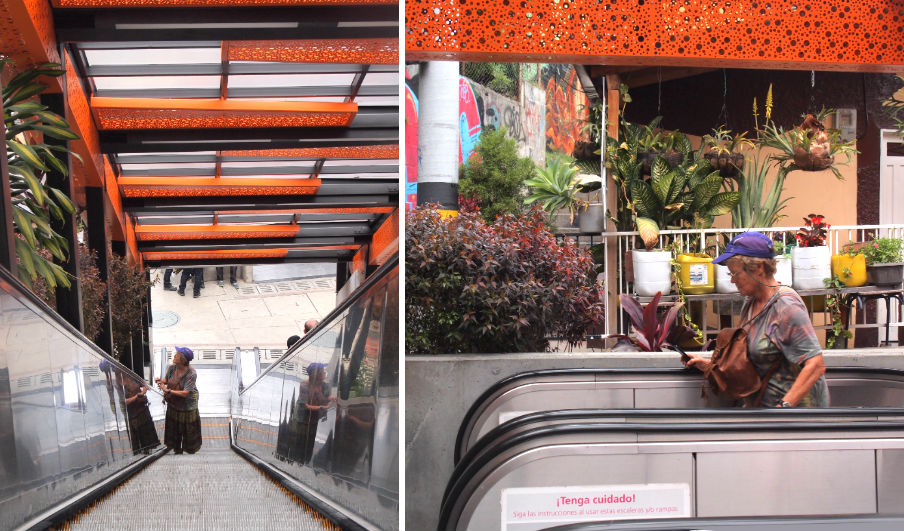 Each landing between one escalator and the next is an attractive little plaza, often with murals and a mirador. Lanes lead from these landings into the former slum.

The escaleras made a huge difference in the life of the community and are a point of great pride. It's an inspiring demonstration of the power for good of well-conceived infrastructure projects.


Also on our second day, we visited Medellin's botanical garden. Near the center of the city, it was very pleasant. As usual, we managed to visit another botanical garden when few orchids were blooming. There were a few, however, beneath a huge structure designed to provide the right amount of shade. 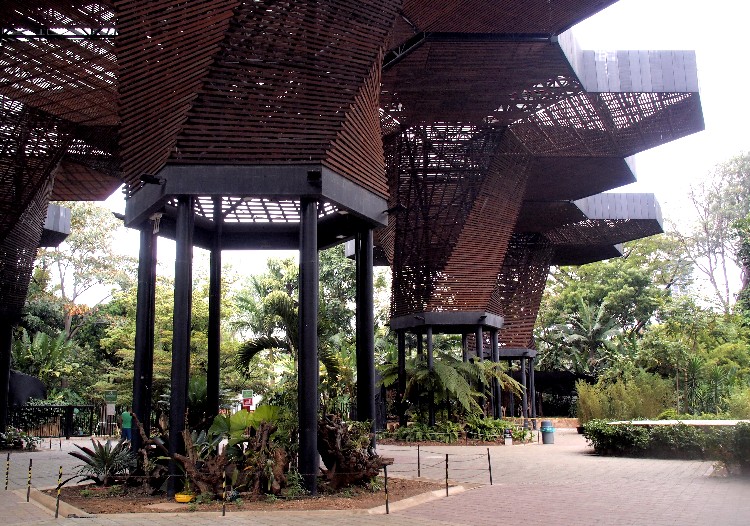 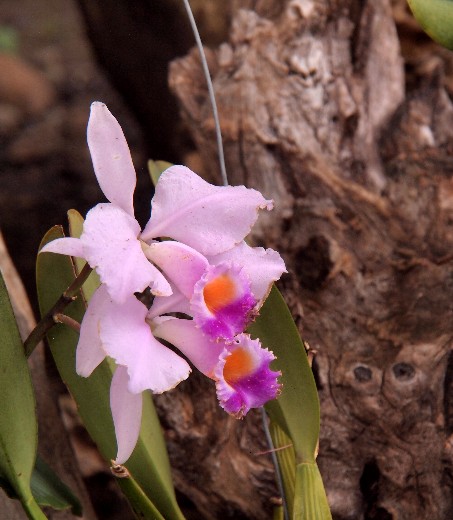 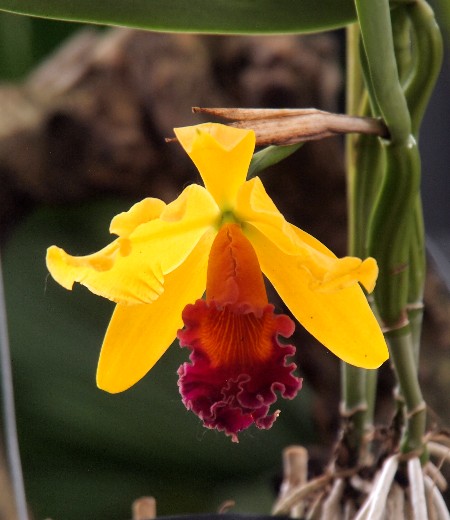 We walked through a small rainforest in the botanical garden. Later, we noticed a poster that argued people should not damage the plants and trees.


One of our favorite parts of the botanical garden was a butterfly enclosure. There we could take photos up close of living butterflies, some of which we later saw in the wild. 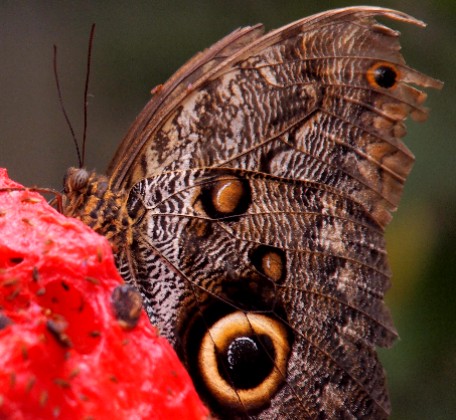 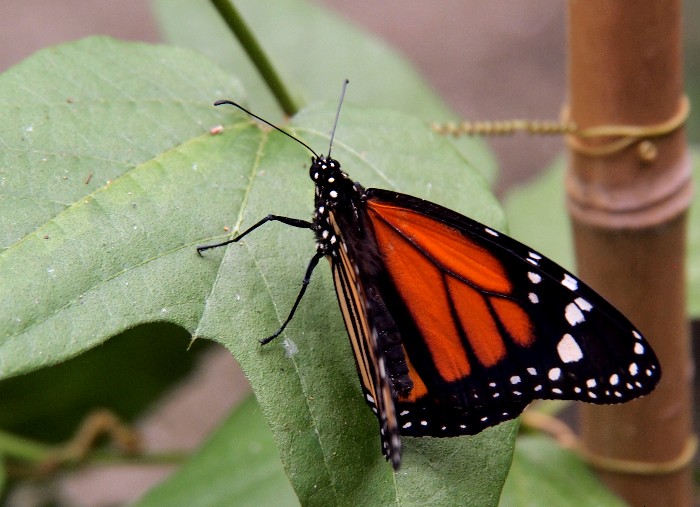 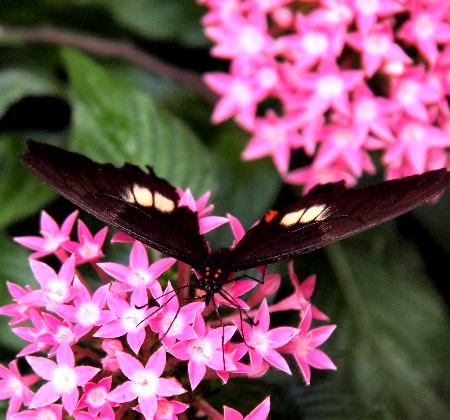 Although Medellin was interesting and its recovery inspiring, it is still a big city and not our thing at all. After three nights, we were ready to head for Guatape, a smaller town on the shores of a huge, man-made reservoir, about two hours northeast of Medellin.