Jardin and back to Manizales

On March 12 we luckily caught a bus from Salamina at about 8:45; luckily, because it was the 8:30 bus, departing late, and we might have had to wait much longer for another.  Our bus was heading to Medellin through La Pintada, where we had to change buses to reach Jardin. It was a wretched ride to Pintada of almost 4 hours. The trip was often scenic, but the dirt roads were mostly in terrible shape; we probably averaged about 12 miles per hour.


La Pintada, when we finally got there, was a busy, rather unattractive place. Luckily there was a bus from La Pintada directly to Jardin, but we would have to wait until almost 4 p.m. to catch it.

We caught our small bus and endured another long, twisty ride, though this time the road was mostly paved and the driver moved right along. Enough about bus rides!

We reached Jardin before dark and caught a taxi to our hostel. At first we were charmed; the hostel is in a lovely setting with friendly English-speaking young people managing the place. We had an immaculate room and bath. The name of the hostel was Canto de Agua, and we could indeed hear a rushing stream from our room. At first, we wanted to stay for a good while.


Things didn't turn out well on that first night, however. There was a birthday party for Chloe, a young woman from Montreal who was more-or-less the manager. The party was still carrying on until very late. Around 3 a.m. we could hear Chloe ordering some guy out of her room repeatedly, and he was accusing her of being a fake feminist. Apparently either he had slapped her, or she him, or both! He did some cursing too, not that cursing would bother us, but the noise certainly did.

On Monday morning, the owner, Henry Cifuente, showed up for a meeting with his staff. We talked with him a little.  In the afternoon, after our morning walk, Henry drove us to another of his properties, Villa Maria, where we are now. It is a beautiful home with lovely grounds and gardens. Two other couples are staying here, both young, but civilized, not party animals. We're loving it. We asked to stay another three nights. Not only did Henry agree to give us the same rate we were paying at the hostel -- except that now we're in a large master suite -- but he also is giving us a free night. We're surrounded by flowers and birds, and it's just about perfect.

"Jardin" means garden, and the name suits this town perfectly. Everywhere -- in front of homes, spilling from balconies and window boxes, along the quiet dirt lanes -- there are flowers, and with them, more birds.


In Jardin there seem to be more bird feeders -- complete with birds -- than anywhere else we can remember. 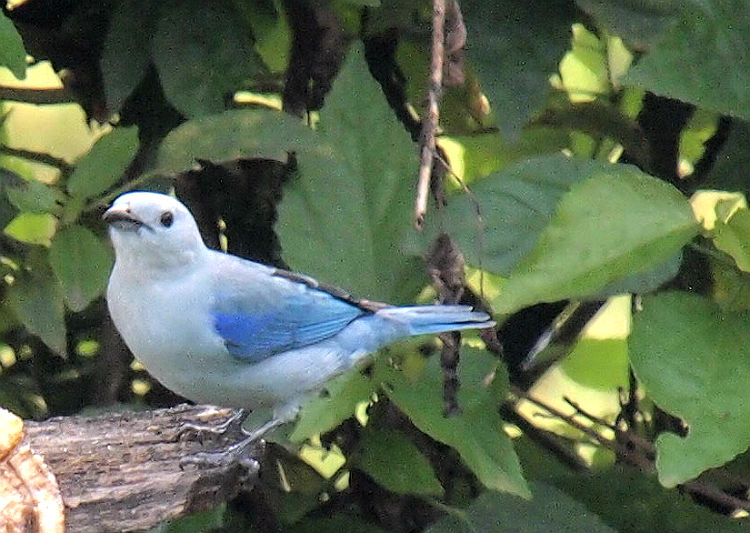 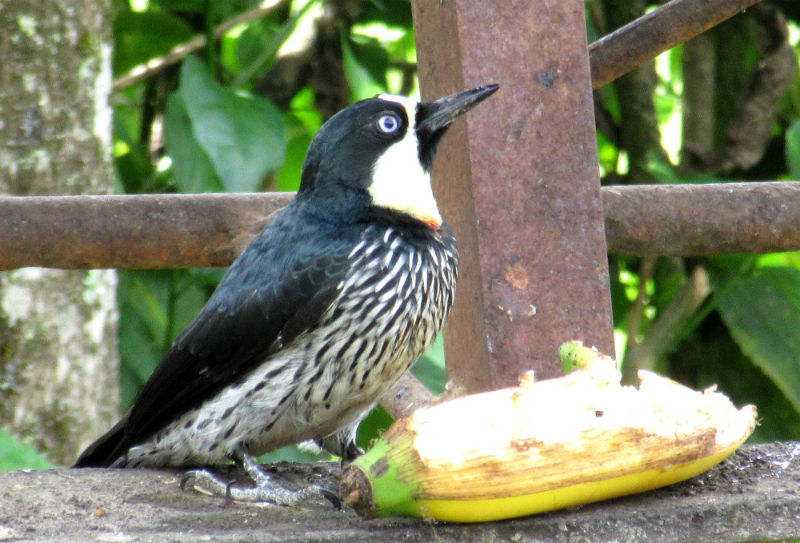 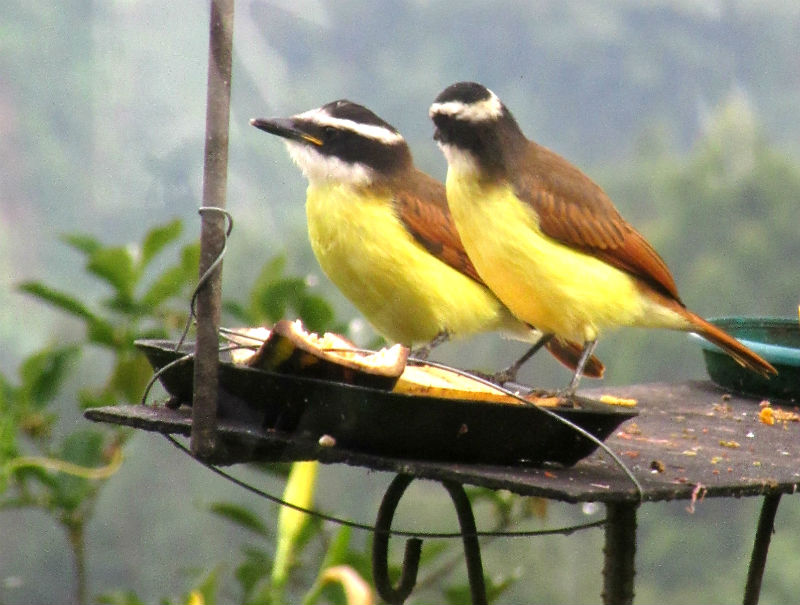 Even in the downtown there are flowers and birds. And of course the imposing church that seems to be a fixture in all Colombian towns.


Each morning at Villa Maria, we were served a nice breakfast with the four other people staying there -- a young couple from Germany and South Africa, and a couple from Paris working at the hostel. One morning we walked to La Garrucha (the pulley). This is a kind of cable car, but actually just a wooden box. It was originally built to haul coffee in and out of Jardin. Now it carries people too.


Every day, we spent the greatest part of our time walking on the network of lanes and tracks that surround the area. We reveled in our surroundings. Everywhere we turned, we wanted to take more pictures.


Later in the afternoon, we visited Gallito de Roca Preserve and saw Colombia's most famous bird, the gaudy (and exceedingly strange-looking) Cock of the Rock (which is what Gallito de Roca means.)

We then walked back into the village to meet an expert birder who would tell us about the birds we had been seeing and photographing. However, there was a misunderstanding, explained later in an email, and we didn't connect. While we waited in a coffee shop, the appointed meeting place, Wally had the best cup of coffee of his life.

Wednesday was another day of walking, broken in the middle by a great lunch at a nearby trout hatchery. Barbara's trout was done with lemon and garlic, Wally's with almonds. Not bad!

On Thursday, our final full day in Jardin, we headed for Jardin's other cable car.

This cable car is a more modern affair, but its only purpose is to take people from the town to a mirador where there is a statue of Christ and a little restaurant. The great thing about the cable car ride is that it leads to a network of trails and lanes that meander all through the hills, and on which it is possible, eventually, to return to town. 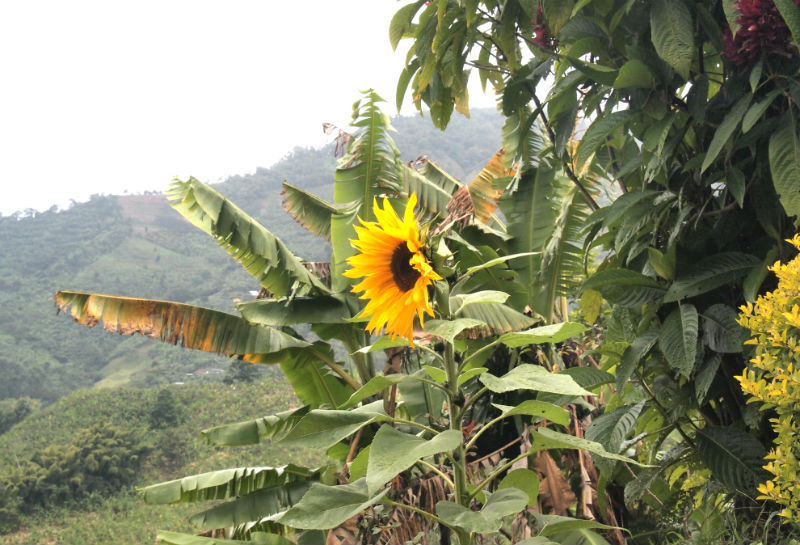 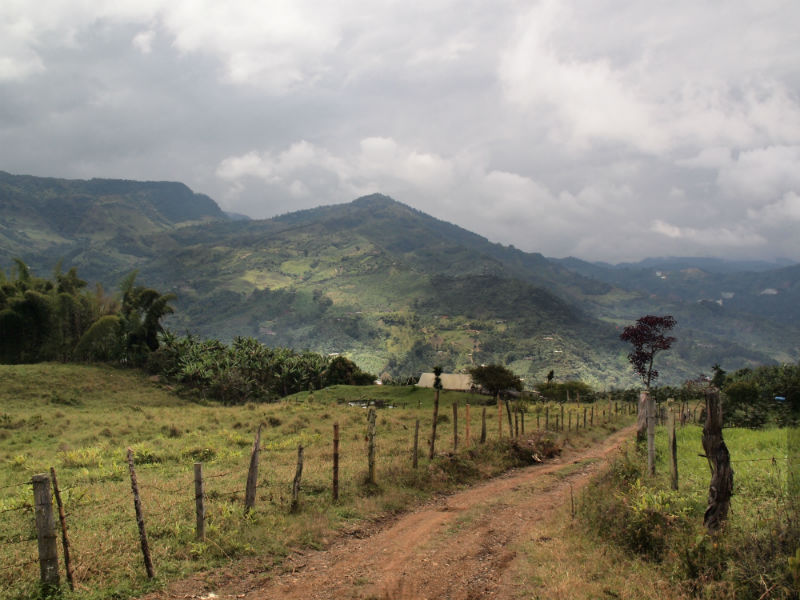 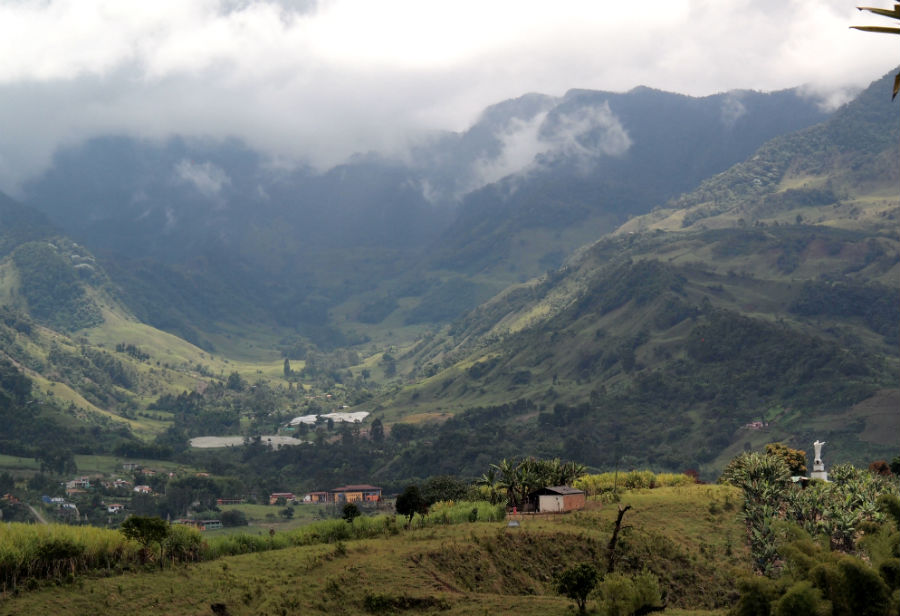 So far in Colombia, we've particularly liked Socorro and Barichara, and now Jardin. What a special place! We'd come back in a heartbeat.

But it was time to travel on, back to Manizales and Patricia's finca in the countryside. We expected that returning there would feel almost like coming home -- and it did. First, though, we had to get through another difficult trip on rural buses.

We set out on the morning of Friday, March 17. We would have to travel via Riosucio, a town whose name, believe it or not, translates as Filthy River. The bus ride was over dirt roads on which you might never expect to find a bus! Imagine a driveway like Eli Mintz's, perhaps after days of heavy rain. But we made it, after one significant delay.


At Riosucio we changed buses, and this time we got the most careful, slowest driver in Colombia. Instead of worrying that we might not reach our destination because of an accident, we worried that we might not get there until hours and hours after we'd agreed to meet Patricia.  But slow and steady did the job, and Patricia was there to meet us at the cable car.

Returning to Patricia's house did indeed feel almost like coming home. Since we've already shown photos of the remarkable countryside, this time we'll just add photos of a dinner, Patricia, and her wonderful daughter Ana.

We were in no way eager to leave Patricia's wonderful place, but we still wanted to see more, so on Monday, March 20, Patricia dropped us off at the cable car and we headed by bus (a better bus) to the small city Armenia, capitol of Qundio province. just three hours south of Manizales.

Continue to Armenia, Salento, Back to Bogota and Home >>